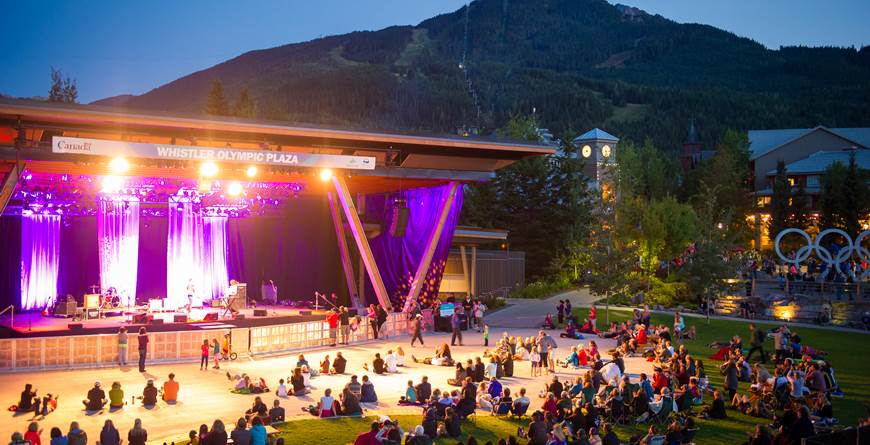 Whistler’s Outdoor Concert Series returns for another year with a huge roster of incredible acts, all of which can be enjoyed for free!

This summer those lucky enough to be in Whistler will be treated to a huge range of amazing musicians and artists. So far the acts announced include the Vancouver Symphony Orchestra across a number of dates, and Michael Franti.

Dates are scheduled throughout July, August and September, with a full list of dates available HERE.

The Outdoor Concert Series consists of a wide variety of free live shows, which take place at the Olympic Plaza.

Going to the shows you will be treated to world-class music acts in the spectacular setting of Whistler, and all for free! The atmosphere at the shows is fantastic and always family friendly.

Spectators can relax on the Village Green or if they’re feeling lively, there’s always dancing just in front of the stage. The concerts attract people of all ages and it really is fun for everyone involved.

The wide range of acts showcases a true diversity of taste with current announced acts including the Vancouver Symphony Orchestra, world music act Nahko & Medicine for the People and hip-hop/reggae/jazz artist Michael Franti.

The shows take place throughout July, August and September with new acts announced all the time. Music begins early in the afternoon with acts usually scheduled for around 2pm and then 8pm.

Be sure to get there early for the larger acts in order to get a good spot on the Green. The shows are on Fridays, Saturdays and Sundays and are incredibly popular with both locals and tourists alike.

The Outdoor Concert Series is an incredibly enjoyable event that makes you feel lucky to live in such a place as Whistler.

The Plaza accommodates audiences of up to 5000 and, along with the lawn, has a playground to keep young children entertained. There are also big screens on the side of the stage if you prefer to relax further away from the stage.

Watch the whole community come together to enjoy the wide-ranging acts and artists. It’s an incredible sight to watch world-class musicians under the backdrop of Whistler and Blackcomb Mountains, as the sun sets on smiling faces.